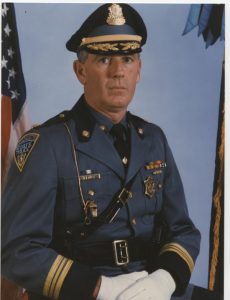 Stephen Charles Leary a longtime resident of Westford, 74,  died Tuesday, February 11, 2020 at Lowell General Hospital.  He was the husband of Birgit (Osinski) Leary with whom he celebrated their 46th  wedding anniversary May 18th .

Born in New Castle, PA, on December 7, 1945, he was the son of the late Edward and Margaret (Redding) Leary.   He graduated from Lowell High School with the class of 1963.

He graduated  with a BS in Criminal Justice from Boston State College and a Master’s Degree from Anna Maria College of Paxton, MA.

Stephen served with the USMC during the Vietnam War.

Stephen was an outdoorsman that enjoyed fishing, boating, hunting, and skiing.

Besides his wife he is survived by his children, Kristin Leary of Holyoke, MA; son, Sean and his wife Brienne Leary of Lexington, MA; daughter Heather and her husband James Campbell of Manchester by the Sea, MA; five grandchildren, Patrick Shattuck, Tripp, Finley and Sloane Campbell, and Gavin Leary; sisters, Rosemary and her husband Michael Jeans of Concord, MA, and Judith and her husband Alfred Boccia of Westboro, MA; brother, Peter Leary and his wife Elizabeth of Seabrook, NH; sister in law, Barbara Leary of Nashua, NH,  Joyce Leary of Andover, MA, and many nieces and nephews.

Stephen was predeceased by his brothers Edward Leary, and John “Jack” Leary

Visitation Friday from 12 Noon to 1pm at the DOLAN FUNERAL HOME 106 MIDDLESEX ST. CHELMSFORD with a Liturgy of the Word at St. John the Evangelist Church at 1:30 P.M. Burial in Fairview Cemetery in Chelmsford. In lieu of flowers, please consider a donation to Westford Veteran’s Gift Fund, Westford Veterans Agent 55 Main St. Westford, MA 01886 ARRANGEMENTS BY DOLAN FUNERAL HOME 978-251-4041.

39 Condolences for Stephen Charles Leary a longtime resident of Westford

So sorry to hear of Steve’s passing. A great guy!
May he rst in peace!

Very sorry to hear of Steve’s passing, he genuinely was one of the best.

I had the pleasure of working with Steve back in the 1970’s in Troop A. Steve was a great guy and always willing to assist and lend a hand. Thank you for your service to your community and to your country. Semper Fidelis Marine. God’s speed.

May Major Leary RIP. He was a great guy and will be well remembered. Condolences go out to all of his family and friends. So very sorry for your loss.

RIP Steve, lots of good memories working with you. You are the Best!

Steve was my midnight Sergeant at State Police Concord. He was a great teacher to young Troopers. Rest In Peace, Sir

We were all so sorry to hear of Stephen’s passing. Rest In Peace Stephen

Thank you so much for taking us fishing in the mouth of the Merrimack River. Cody Dylan and I had a great day that day. You expose my young boys to someone to look up to.

Condolences to the Leary family.
I worked with Steve at SP Concord for several years.
Great guy,great Trooper.
R.I.P. Marine

My deapest sympathy goes out to the entire Leary family. So sorry for your loss and take comfort that you you have family and friends that are with you at this time.
Best regards,
Brian Shea

Birgit, I am so very sorry to read about Steve. Please call me when you have a chance.

I agree with some many others in that he was a great man. My condolences go out to his family and friends. Major Leary RIP.

My condolences to the Leary family. Rest in peace Major. I only got to interact with you a few times in my career but everytime you were a true professional and always brought honor to that uniform.

SemperFi Major, as said by everyone great guy who always had that laugh.
Helpful to anyone who needed it.
RIP

My sincerest condolences to the Leary Family. Major Leary was a man of honor and strength. Rest well Sir, Semper Fi.

My sympathies at this great loss! God Bless Steve’s Family! May he give you peace at this time!

What a wonderful and down to Earth guy. RIP.

RIP Major it was a pleasure working with you back in the old k-9 days, lots of memories our thoughts and prayers are with you and your family.

While I was the Troop Commander at SP Logan, I was promoted to Major and MassPort advised me that they would leave it up to me as to who I wanted to replace me as Troop CO. I chose Steve and never regretted it. He was a good man, a good cop and a good friend. My deepest condolences to the family. RIP Steve.

RIP! I will always remember our time together at A-3 eve shifts in 1973!

I had the distinct pleasure of working with Steve at SP Concord (A-3) in the late seventies. Truly, he was an individual of character, substance and integrity. May you rest in eternal peace with God. Very respectfully submitted, Marty Stephens

Of all the men and women that I have had the honor to serve with Steve was one of the very best. A man of goodness and high moral character. RIP my friend. Sincere condolences to the family and loved ones.

Sorry to hear of Steve passing. He was a truly good person. Enjoyed working with Steve through most of our careers. RIP

My condolences to Steve’s family, great guy and true professional. Always a pleasure to run into him at work!

We lost another outstanding member of the 53rd RTT. My condolences to the family.

A great boss and always a true gentleman.

I am So sorry to hear of Steve’s passing. I’ve been reminiscing how we grew up together in the highlands,high school,working on the Cape,skiing at Mt. Snow and our years together on the State Police.
To Birgit,Judy,Rosemary& Peter my deepest condolences.
John and Kay Maloney.

Very Sorry to the Leary Family for your loss. Steve was a total gentleman and a great mentor to a young Trooper from the 59th RTT. Steve no matter where his career took him from uniform patrol to K-9 to up the chain of command he remained the same caring and considerate person he always was. Our paths passed many times from A to C to GHQ Steve was always “The Best”…RIP Brother.

Steve and I as young troopers were stationed together at SP Concord. Nearly a quarter of a century later, He would become the C-Troop commander and my final one. During the week last week on the payroll, I requested a transfer in writing to SP Grafton in order to technically finish up where I started. Steve called me the next day, a bit bewildered but, the transfer came out on the following day. The rest is history. Steve granted my last request while still on the job. We enjoyed working and having a lot of laughs together. Rest In Peace my brother.
Ron Lamoly 54th RTT ‘70

A man I only knew for a few years, but a man I really looked up to. My thoughts and prayers go out to the Leary Family.

Our career paths crossed many times on the job. He was a credit to the uniform and I was fortunate to have known him.

Steve was well liked and respected by all who knew him. I am proud to have called him a friend and classmate.

Dear Birgit, thinking of you. Remember going to your wedding in CT. What a handsome couple. Our Hearts go out to you and the kids and grandkids. Sincerely, Steve and Marsha McGee