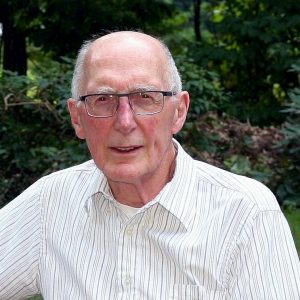 Thomas Raphael Pucci of Chelmsford, age 86, died peacefully on Wednesday October 2, 2019 at Lowell General Hospital, surrounded by his loving family. Tom was a loving husband, father and grandfather with strong family values.  Family came first.  Family was his top priority.  Tom and Rita instilled strong family values in their children; which will carry them through this difficult time, and will continue to be passed down to future generations.

Tom was the husband of Rita (Stebbins) Pucci with whom he celebrated their 62nd wedding anniversary on August 17, 2019.

Born in Northfield, NH on July 6, 1933, he was the son of the late Sebastian and Anna (Murphy) Pucci.  He graduated from Tilton Northfield High School with the class of 1952, and the University of New Hampshire with a Bachelor in Science in Math.  He attended MIT at Lincoln Labs.  He retired as a Civilian Systems Engineer at Hanscom Air Force Base.

He was a communicant of St. Mary Church in Chelmsford.  Thomas coached Chelmsford Youth Sports.  He was an avid sports fan and enjoyed fishing, running and basketball.

He is survived by his wife, Rita Pucci of Chelmsford; three sons, Michael and his wife Terri (Pond) Pucci of Ashby, Stephen and his wife Elizabeth (Montesi) Pucci of Reading, David and his wife Melissa (Petrillo) Pucci of Reading; four daughters, Laurie and her husband Steven Morency of Townsend, Linda and her husband Louis English of Farmington, NH, Debra Pucci of Pepperell and Diane and her husband John Murphy of Pepperell, he was also the loving grandfather of Eric Morency, Shannon Morency, Stephanie (Murphy) and her husband Christopher Godfrey, John Murphy, Michael Pucci and his fiancé Kelsey Liles, Sara (Pucci) and her husband Michael Paradis, Dariya Robinson, Thomas Pucci, Dominic Pucci, Andrew Pucci and Anthony Pucci.  He is also survived by four great-grandchildren, Kyleigh Godfrey, Christopher Godfrey, Jr., Michael Pucci and Daniel Pucci.  He was the brother-in-law of Raymond and Cecile (Aube) Stebbins of Avon Park, FL Maurice and Lee (Roby) Stebbins of Bethlehem, NH, Charles Stebbins of Huntsville, AL and as well as many nieces and nephews.

Dave and Family,
We are so sorry for your loss. I remember some of the stories you had told us in our time working together and know your Dad will be deeply missed. Please know our thoughts are with you all at this time.
Sue & JoAnn

So sorry to hear of your father’s passing.

To Rita and all of the Pucci family,
thoughts and prayers.
Joanne Lees, Northfield, NH

To Laurie, Steve, Eric, Shannon and all the Pucci family and extended family, our thoughts and prayers are with you during this difficult time. Hugs to all of you.

To Eric and all the Pucci family, all of us at WFD send our thoughts and prayers during this sad time. It sounds like your grandfather had an amazing life and was loved by all.

We are deeply saddened to read today of the news of your Dad’s passing. Please know you are in our thoughts during these trying times. Take care of yourself and each other. Try to remember the great times you shared.

To Rita and your dear family,
I have many happy memories of our school reunions with you and Tom. I will join you at St. John Cemetery on Thursday.
With sincere condolences, Wayne and Ruth

To Rita and the Pucci family
My dear friend Tom brings so many memories of his life: TNHS, UNH, best man at my wedding with Lorraine. Tom was a kind person that strengthened our society. He enriched my life by knowing him. We will be joining you at St. John Cemetery on Thursday.