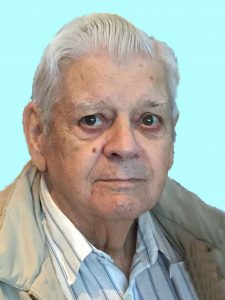 Born in Boston, MA, he was the son of the late Thomas and Mary Regan.  Tom was a graduate of Cathedral High School with the class of 1953.

He served with the U.S. Air Force during the Korean War as a crewmember of a B-36 Peacemaker.

He retired in 1992 from Instrumentation Laboratories.

He was a communicant of St. John the Evangelist Church in N. Chelmsford, MA.

He was a life member of the Knights of Columbus.  He enjoyed traveling with his wife worldwide touring 55 countries, and traveled throughout the US with his family.

He was the grandfather of the late Jessica Najm, and the brother to the late Marie Keefe.

Relatives and friends are respectfully invited to attend his visiting hours Wednesday, October 23, from 3:00 PM to 7:00 P.M.  His Funeral will be Thursday, October 24, starting at 8:00 AM from the DOLAN FUNERAL HOME, 106 MIDDLESEX ST. CHELMSFORD, with a Funeral Mass at 9:00 AM at St. John the Evangelist Church in N. Chelmsford. Burial will follow in Pine Ridge Cemetery, Chelmsford. ARRANGEMENTS BY DOLAN FUNERAL HOME 978-256-4040. Guestbook at www.dolanfuneralhome.com

I’m so sorry to hear the sad news. My deepest sympathy to family.