William F. Shaughnessy, 88, left this earth to join his beloved wife, Mary in eternal rest on May 5th. 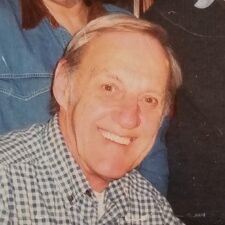 William was one of five children born to Thomas and Grace Shaughnessy. He grew up and was educated in Lowell schools. He married the love of his life Mary, and they were married for 61 years at the time of her passing.

He worked for the U. S. Government, stationed at Hanscom Air Force Base for 32 years. As he progressed in rank, his job required him to travel to many states and various countries for his expertise.  He also worked out of the Pentagon in Washington, DC. The one thing that his “Bride” did not like about his job was having him gone for these trips.

In his younger years, he coached Little League for the Highland Little League. He participated in “The Highland Players” organization, a wonderful group of parents, friends and family of the players of the baseball league; for many years helping to raise money for the League and many other non-profits organizations.

He and Mary settled in Chelmsford and were very happy to have a wonderful home to share with family and friends. Every Christmas Eve they would have family, friends, friends of family, and friends who were like family gather to enjoy each other’s company and celebrate the holiday together. Bill took it upon himself to make sure that everyone’s glass remained full. He would say that “you need more grapes”.

William is survived by his children who will miss him dearly. Daughter, Patricia (Patti) Shaughnessy-Knowlton and his son in law Philip Knowlton. His son, James Shaughnessy and his daughter in law Nancy Shaughnessy. He is also survived by six grandchildren; Daryl and his wife Lisa, David, Thomas and his wife Kasey, Erin and her husband Jay, Jonathan and his long-time girlfriend, Emma and his youngest granddaughter, Amy who brought such joy to him. He is also survived by seven great grandchildren; Brandon, Christopher, Kylie, Alex, Kevin, Alice and Declan. He is survived by someone who thought of him as a father, Susan English, who has been like a sister to his daughter for over 50 years and was considered part of the family. He loved her like a daughter all his life. He is survived by a brother, James Shaughnessy and a sister Marilyn Shaughnessy both of Amherst, NH.

The family would like to thank the Nelson Family for always being there to help our dad and being great friends to both he and our mother.

A very special Thanks to Dr. Catherine Trinh for the special place in her heart that she had for our dad and ensuring that he received the best care possible.

It being Bill’s wishes, there are no calling hours or services. Interment will be private at the convenience of the family.

Bill’s belief was that instead of a monetary donation in his name, please do something kind spirited to make the world a better place. Life is short, take the time to care and live it to it’s fullest.

Written by Cathy Lewis on May 10, 2022. Posted in Obituaries

3 Condolences for William F. Shaughnessy, 88, left this earth to join his beloved wife, Mary in eternal rest on May 5th.