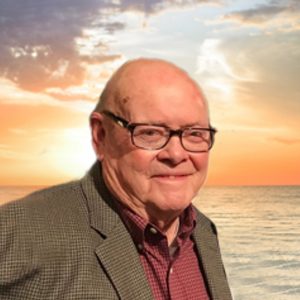 William Stephen “Steve” McKenna of Westford, age 87,  died peacefully on Friday October 25, 2019 at Lowell General Hospital surrounded by his family.  He was the husband of Elaine (McGowan) McKenna with whom he celebrated their 62nd wedding anniversary August 22, 2019.

Dorothy McKenna.  He was raised in Woburn, MA, from where he had many fond memories, and graduated from Boston College High School and Boston College.

Steve served with the US Army during the Korean War, and retired in 1994 from the electronics Industry.

He and his family moved to the Nabnasset section of Westford in 1963 and made their home there for 56 years, enjoying long-lasting friendships with neighbors. He was a communicant of St. Catherine Church in Westford.

Steve was an avid photographer and a founding member of the Nashoba Valley Photo Club.  He served on the Town of Westford Housing Authority and the Economic Development Commission.  He was enormously proud of his grandchildrens’ accomplishments, and always made sure to have a front row seat to their games. He was their biggest fan.

Besides his wife he is survived by his son, William “Bill” McKenna Jr. and his wife Laura of Shirley, MA;  daughters, Ellen McKenna-Doiron and her husband Jerry of Shirley, MA, Beth Paulauskas and her husband Ronald of Westford;  Seven grandchildren, Molly, Shelagh, and Rose McKenna, Amy, Kara, Emma, and Michael Paulauskas; and many nieces and nephews.

He was the brother of the late Margaret Sawyer and Sheila Burke, who predeceased him.

Visiting hours Tues. from 3 to 7 PM at the DOLAN FUNERAL HOME 106 MIDDLESEX ST. CHELMSFORD. Funeral Wed. 9AM at the Funeral Home with a 10AM Mass at St. Catherine Church. Burial in Pinegrove Cemetery in Westford. Memorials in his name may be made to St. Catherine of Alexandria Church 107 N. Main St. Westford, MA 01886. ARRANGEMENTS BY DOLAN FUNERAL HOME 978-251-4041.

I will miss Steve dearly, but have many fond memories through the photo club he co-founded, our adventures and his humor.

So very sorry to hear of Steve’s passing. Thinking of all the family with love from the McKenna family in Derry.

Dear Beth, Ron and Family:
We are deeply saddened by the news of Steve’s passing. He will be fondly remembered. He always had a great smile on his face especially when around his grandchildren. God Bless.
Love,
Lisa & Mike Kyle

Elaine, Bill, & Beth… Mom & I are so sorry for your loss. Our thoughts & prayers go out to you and the rest of your family at this difficult time.
– Lisa (& Lea) Grant 💕

Dear Bill, Laura, Molly, Shelagh, and Rose,
I am so very sorry for your loss.
With love,
Tracy Wakeman

I am sorry for the McKenna family and we are thinking of all of you xxxx
I enjoyed Steves sense of humor and met him at the photo club 20 years ago he was called coach by a small group in our circle of friends .As he was always willing to help us understand our cameras and teach us what he knew to take better photographs .
We had wonderful memories with him at my condo in Florida, lake winni , lupine field ,Polly’s pancake house and many other photo trips with our fellow photographers , He loved his family and we all got to know all of you through his photography.
He started a wonderful photo club that continues
thriving today.
He will be missed so much by all of us.
His memory will live on through his family and all of us in his photography family.
So many memories and laughs with us all .
A great man we will remember by his infectious smile always making us laugh and eager to help any one of us with our photography .
Rip Steve I’m sure your taking pitchures with Walter and Dick till we see you again
Lynne Peterson

I’m so sorry to hear the passing of Steve . He was such a funny man with a kind heart ! The best wedding photographer a girl could dream of ! My thoughts are with all of you
Michele (LaChance) Melendez & Family

Dear Elaine and family,
I am very sorry for your loss. Steve was a bright light at the Nashoba Valley Photo Club. His humor, awesome photography, cartoons and love of family will always be remembered. He mentored many club members and dedicated much time to the club. May he rest in peace.

Bill, Laura and the girls… John and I were sorry to hear of the passing of Bill’s father. We send you love and prayers at this difficult and very sad time. ♥️

Dear Elaine and Family–Our thoughts and prayers are with you all in the passing of Steve. He was such a great man. Rest In Peace.
Sandra and Roland Bergeron

So sorry to hear of the passing of Steve he was such a nice man easy going with is little Irish humor thrown in
Such a great photo of him he would be proud !!
I was lucky to have know him❤️
My thoughts and prayers are with you all
May he RIP 🙏🏻🙏🏻

I first met Steve at the photo club in 2008 and immediately like him and he was a great friend from day 1. I enjoyed sitting with him at the meetings and his irreverent humor which I loved. I will miss him dearly.

Steve combined his tech expertise, a wide range of interests, his Irish wit, and attentive love of family to help let the good times roll… Mary Lynch Grady, my mother, helped to raise Steve in the Lynch family home at 2 Lexington St., Woburn. When I was born in 1952, Steve drew a cartoon that depicted me as the quarterback for the BC football program, with the correct class of ‘74 designation. My school choice turned out differently, but I was forever struck by his skill as an artist, and his generosity in producing one of the keepsake items in my baby book. I’ve enjoyed the same lifelong interest in illustration that both Steve and Celia —his father’s cousin and my grandmother — had. So it came as no surprise when I ran into him after a many years in the Apple section of the former CompUSA store in Woburn. Being the part-time Mac guy in charge there, I wandered over to see whether this gentleman needed any assistance … Wait…“Steve??” I asked. Sure enough, there he was, beaming. And several Sundays in a row, he came back in and we planned out an extended-family, lobster-bake cookout in York, Maine, with 60 relatives attending. It turned out to be the last big reunion with that generation. I will always recall Steve referring to the many names on the guest list as the Grand Army of the Republic!

Ellen and family – I am so sorry to learn of your Dad’s passing. From all I’ve heard over the years, he was a great guy. May your memories of him bring smiles to you where today there are tears. My deepest sympathy to the entire family.

Bill, Laura, Molly, Shelagh, & Rose,
We were so sorry to hear about the passing of Bill’s father. You have all been in our thoughts and prayers. Know that you are all missed at St Paul’s.
Jack & Marlene Smith

Sincere sympathy at Stephens passing. May his soul and the souls of all the faithful departed, rest in peace, Amen.

I am so sorry to just hear about Steve’s passing. I have fond memories of Steve and you both while remodeling your kitchen and building your deck many years ago. I am glad I stopped bye last year and spoke with Steve. He did bring a smile to my face and always had time to listen to my stories and I liked to listen to his as well. I will miss him.
My deepest sympathy to your entire family.