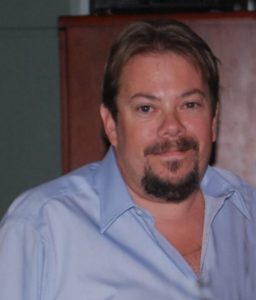 He was married to Mrs. Wendy (Fisher) Nolet with whom he would have celebrated their 21st wedding anniversary on May 9, 2019.

David was born on November 10, 1967, the son of the late Edward and Ethel Nolet. He was a graduate of Nashoba Technical High School with the class of 1986.

He owned and operated the Lunch Bell Eatery of Bedford, NH.

He was a communicant of Our Lady of Mercy Church of Merrimack, NH.

David enjoyed Nascar and was a fan of Dale Earnhardt. He enjoyed going on cruises in the Caribbean, and keeping everybody up to date of his activities and family on Facebook. Known as “Papa”, he loved spending time with his grandchildren.

Besides his wife, he is survived by a daughter, Brianna Nolet of Merrimack, NH; a son and his wife, Russell and Katherine Bovill of Merrimack, NH; three sisters and brothers-in-law, Paula and Steven Ellis of Salisbury, MA, Sheila and Edward Lisavich of Salem, NH, and Sharon and Robert Campbell of Wolfboro, NH; five brothers and four sisters-in-law, Edward and Judith Nolet of N. Chelmsford, Richard Nolet of N. Chelmsford, Joseph and Cheryl Nolet of Tyngsboro, MA, James and Bernie Nolet of Spring, TX, and Robert and Millie Nolet of Westford, MA; two grandchildren, Giulianna and Deklan Bovill; and many nieces and nephews.

Visiting hours will be Tues, 3 to 7 P.M. His Funeral Service will be Wed. at 11am at the DOLAN FUNERAL HOME, 106 MIDDLESEX ST. CHELMSFORD, MA. Burial in St. Joseph Cemetery, Chelmsford. Memorials may be made in his name to the Community Hospice House, 210 Naticook Rd., Merrimack, NH 03054. ARRANGEMENTS BY DOLAN FUNERAL HOME 978-251-4041. Guestbook at www.dolanfuneralhome.com

Wendy and family. We are so sorry to hear of your loss. Please know our thoughts and prayers are with all of you. Dave was a special man, who made everyone feel welcome . We will miss him. Tom & Barbara Bovill

We are neighbors of Bery and Jim Nolet. We have enjoyed getting to know Dave and the brothers when they come to Texas. There’s no words that I can say that can make this better for all of you but we are heartbroken over your loss. It will never be the same for this family but we will pray for peace for all family and friends.
Tommy and Pat Beal

Wendy, Russell, Katherine, Brianna and the extended Nolet family: Words cannot express the loss we have endured with the passing of Dave. From the day we met Dave when we first “lived” next door in NH he was the friendliest, most genuine, caring, giving person we have ever met. Dave would give you the shirt off his back and expect nothing in return. Rocco and I, Jessica and Rylee and all of our family and friends that had the pleasure to meet Dave will miss his funny stories and infectious smile. As Dave was to all of us…we will always be here for all of you. Our deepest sympathy to all. Rest in peace our dear friend. Love you forever. Jenn and Rocco

Dave and Stevie were Uncle and Nephew but they might have well been brothers!!!It was a pleasure to know them in the 90’s ! They had an early influence on me and my tenure as a garagekeeper in The village of North Chelmsford !!! Billy Quinn