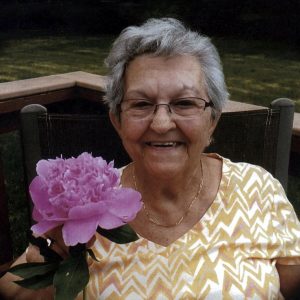 Born in N. Chelmsford on June 2, 1928 the daughter of the late Eugenio and Anna Marie (Stabile) Fantozzi, she attended Chelmsford School System.  She retired from Silicon Transistor Company.

Dear Rita was a beloved wife, mother, grandmother, great grandmother, sister, and friend.  She loved life fully and enjoyed time with her friends and family cooking together, sharing a meal, and laughter around her table.  She was a free spirit who loved flowers, puzzles, playing cards, and bingo.  The magic of Rita was that she formed special relationships with all she met.  She will be dearly missed.

She traveled to France, Greece, the Philippines, Texas, California, and Kansas with her husband during his service in the Air Force, before returning to their home in Chelmsford. They wintered in St. Petersburg, FL.

She was a communicant of St. John the Evangelist Church in N. Chelmsford, and served on their Hospitality Committee, and a member of the Chelmsford Elks Lodge 2310.

She was the sister of the late John, Frederick, and Nicholas Fantozzi, the late Lena Cummings, Ann Bonura, and Rose DePalma, her best friend and sister.

The family would like to express their gratitude to D’Youville Senior Care Center for their kindness and dedication.

LEO, Doris Rita Leo of Chelmsford died Jan. 27, 2020. Visiting Hours will be Thurs. from 3 to 7 p.m. Funeral Fri. at 8am from the DOLAN FUNERAL HOME, 106 MIDDLESEX ST., CHELMSFORD with a funeral Mass at 9am at St. John the Evangelist Church in N. Chelmsford. Burial in Fairview Cemetery, Chelmsford. ARRANGEMENTS BY DOLAN FUNERAL HOME 978-251-4041. Guestbook at www.dolanfuneralhome.com

My deepest condolences for your loss. Rita was an active member of our Hospitality Ministry at St. John’s. Her generous service to the parish through hospitality was a blessing to us all. I will miss her beautiful smile and calming voice. Rest in peace, Rita.

I had the pleasure to know Rita, she was beautiful inside and out, my condolences to her family, Donna sending hugs and prayers, sue Pender

Deepest condolences to the entire family. Aunt Rita was a shining star and will be sorely missed! I’m confident that my grandmother is welcoming her to heaven with open arms!

During the 7 years that I lived with my grandparents, I had the pleasure of seeing Aunt Rita almost everyday. She and her sister Rose would sit in the kitchen or on the porch with their tea and chat for hours. Their laughter was contagious. Their love for each other and their families was heartwarming. Their stories about the old days were not to be missed. I think it was during one of those chats that I heard the acronym PIA for the first time–though I will never tell who said it or who they were talking about. I’m sure the “partners in crime” as they called themselves have reunited in Heaven. The tea cups are full, the cards have been shuffled and laughter is filling the air. Rest in Peace Aunt Rita. You will be missed.

Rita was the most cheerful and happy person I had met. Her family and friends were were so important to her…..everyone enjoyed her company.

Estelle, I am not able to attend any of the services but will hold your mom in my prayers and the rest of of your family. I am sure that Diana will be there greeting her with open arms!

Love and prayers to all the family.
Barbara Renison