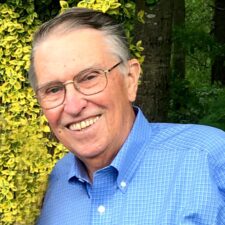 James M. Harrington, 82, Newburyport, MA formerly of Chelmsford, MA passed away peacefully in his home surrounded by his loving family on June 17, 2022.  He was the beloved husband of Barbara Abreu Harrington for 36 years.

Jim was born on June 18, 1940 in Somerville, MA. He was the son of the late Walter and Dorothy Harrington. He graduated from Matignon High School in Cambridge, MA. He received his undergraduate degree from Northeastern University and, after returning home from the Army, he received his J.D. from Suffolk Law School.

Jim was a Veteran of the United States Army (1963—1965), serving time in Korea with the XVIII Airborne Corps before returning home. Jim opened his private practice of general law in Chelmsford, MA and served as the Town Counsel in Chelmsford for 18 years, as well as representing the Chelmsford School Department, the Chelmsford Sewer Commission and the Chelmsford Water Districts. He also served on the Chelmsford Board of Library Trustees and the Nashoba Valley School Committee. He was an active member of the Chelmsford Democratic Town Committee for many years. Jim was always giving back to the community wherever he lived and remained very involved in organizations such as Good Friends in Chelmsford and volunteering at Rosie’s Place in Boston.

He was a passionate photographer. In his free time he enjoyed golfing, reading and traveling with his wife, Barbara. Perhaps his favorite activity though, was spending time with his family especially his ten grandchildren. He enjoyed taking photos at their sporting events and all other special occasions.

He is survived by his six children. Susan McQuaide and her husband Scott of North Chelmsford, MA, Judi Hicks and her husband Jean Michel of Nashua, NH, James Harrington and his wife Debra of Tyngsborough, MA, Michael Harrington of Nashua, NH, Jason Leroux and his wife Dawn of St. John, USVI, and Elizabeth Goguen of Nashua, NH, as well as his ten grandchildren, Scott, Kyle and Kate McQuaide, Danielle and Jack Withycombe, Annabelle and Jimmy Harrington, Samuel and Zachary Goguen and Cooper Leroux. He also leaves behind his sister, Dorothy Winrow of Kingston, NY, his brothers, Daniel and Angie Harrington of Salem, MA and Paul and Betty Harrington of Newburyport, MA. He is also survived by his mother and father-in-law, Doris and Joseph Abreu of Dracut, MA, his sister-in-law, Joan and Paul McCarthy of Lowell, MA, brothers- in-law, Anthony Abreu of Derry, NH and Richard Abreu of Ocala, FL as well as many nieces and nephews.

As well as his parents, Jim is predeceased by his brothers, William and Walter, his sister-in-law, Kay Harrington and his brother-in-law, Bob Winrow.

Visiting hours Wednesday, June 22, 2022 from 3 to 7 P.M. Funeral Thursday, June 23, 2022 at 10am from the DOLAN FUNERAL HOME, 106 MIDDLESEX ST., CHELMSFORD, with a funeral Mass at 11am at St. Mary Church, 25 North Road, Chelmsford, MA 01824. A private burial will be in Pine Ridge Cemetery, Chelmsford, MA.  Memorials may be made in his name to Care Dimensions Hospice, 75 Sylvan St., Suite B-102, Danvers, MA 01923 or to support Genitourinary Cancer Research at Massachusetts General Hospital Cancer Center under the direction Dr. Richard J. Lee. Checks may be made out to Massachusetts General Hospital c/o MGH Development Office, 125 Nashua Street, Suite 540, Boston, MA 02114.  ARRANGEMENTS BY DOLAN FUNERAL HOME 978-256-4040.  Guestbook at www.dolanfuneralhome.com

Written by jimydolan on June 18, 2022. Posted in Obituaries