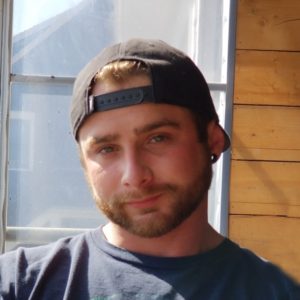 Jeffrey Francis Champlain, Age 26, died unexpectedly Saturday, March 16, 2019 in the comfort of a family home.  After several years of battling addiction he is no longer in pain.  He leaves behind his loving wife Emily Champlain and their beautiful son Brody Champlain.  He also leaves behind his wonderful mother Joyce and his father Robert, as well as his twin brother and best friend Jon.  He also survived by his father in law Mark Lovell, as well as his mother in law Lorna Lovell, and his two brother in laws James and Samuel Lovell.

Jeff graduated from Waterford High School in 2010; he continued on to Plymouth State University and graduated in 2015 with a Bachelor’s degree.  Jeff was passionate in his trades, hardworking and always willing to lend a helping hand to anyone that needed one.  He was talented in the field of carpentry; he loved working with his hands and helping build for others.  He loved his son more than anything in the world and found joy in teaching and guiding him along with the simple things like playing together and cuddling.

He had a big heart and was loved by so many.  His memory will live on through the love he gave and received forever.  He lays at peace now with his recently deceased grandparents Francis and Jane Bullan with whom he was very close.

My condolences to the Champlain family. Jeff was one of my lacrosse brothers, we had a lot great times and I’m going to miss him a ton. He was a great man and someone I could always rely on, had a lot laughs. My thoughts and prayers go out to his whole family.

my thoughts and prayers are with you all especially Em and Brody. Jeff fought a good fight and I’m grateful to have gotten to know such a special guy. rest easy Jeff and keep watch over Em and Brody. you will live in my heart forever.

I’m happy I got to spend a couple summers working with Jeff and Jon at the Camp Harkness beach. Jeff was such a sweet guy and was great to work with , he was like a little bro to me for those summers. I remember how all us lifeguards would goof around when the beach was quiet. And Jeff was always one of the most talented when it came to fixing or building something in a pinch. He will always be remembered .. Emily and Jon I’m so sorry for your loss, thinking of you both, as well as the entire family and Brody ..

I am so so sorry for your loss Emily. My thoughts and prayers are with you, Brody, and your family.

Our thoughts and prayers are with all of you. We have such great memories spending time up north. You could see the love he had for his family. Emily, Brody we are here for you if there is anything we can do. We love you ❤️

Our thoughts and prayers are with you. i am remembering all oh the funny things our kids did from great neck all of the way up to waterford high school. Jeff had the best smile and it could be a little devilish!!! my heart is breaking for all of you. i no he will be missed by many. so sorry got your loss

We are sorry for your loss, may you be comforted by the thoughts and prayers from family and friends. The Mitteness family of Waterford Doug, Liz, Jen and Alex.

Keeping you all in our thoughts and prayers at this very difficult time. May your warm memories help to sustain you in the days ahead. Sending Lots of hugs to you Emily and to Brody. Jeff will continue to watch over you both from above. Much love from Carol & John Osterman. Oxoxox

I am so sorry for the family’s loss. I will pray for eternal peace. I’ve loved Jeff from the minute he was born and loved him forever. I am so saddened by his passing but at least he is not in pain anymore. I love you Jeff!

RIP Jeff… We were neighbors for 7 years, you cracked the meanest jokes on the bus! Your sense of humor is what I will remember the most. My condolences are with the whole family! May you rest peacefully ❤️

Emily,
There are no words to express my sorrow for you and Brody. I hope the happy memories will help you in the days ahead.
Love, Dianne

I’m so sorry for the loss to the Champlain family. Jeff you were one that would always make me laugh and was always the protective “big brother” for me. I know we lost touch for quiet a few years but I stayed in tough with Jon and always asked about you. When I heard you were gone I was shocked. I hope you know how much I loved you and was grateful for your friendship. RIP Jeff ❤️❤️

Jeff, some of my best memories at Saint Leo were our trips to the cafe for breakfast!!! Buddy, you always had the biggest smile in room. You’ll be missed. Praying for all his family. ❤️

Dear Emily, My deepest condolences and sympathy for you and your family. I understand the hurt and pain
you are coping with. Jeff was a great person! I just would like to say, please feel free to reach out to me anytime!!

My sincerest condolences to the Champlain family.
I remember both boys, Jeff and John, as youngsters cooking Christmas cookies at my sisters home in Waterford.
May God comfort you.

My sincere condolences to Joyce and Robert , I have fond memories of our boys all playing together , doing scouts & wrestling together . This is truly a very sad loss . My heart breaks for his entire family . Stay strong now for each other and Jon . Friends and family remember his smile and the good times . God bless you all in this time of need .

Emily, so sorry for your loss. I know it has been a long hard road. I hope you and your son stay strong. My thoughts are with you and your family. Tom Derian (Balance Spa client)

Emily.
I am so sorry for your loss Emily. My thoughts and prayers are with you, and Brody today and always.

Dear Emily and family:
So sorry for the loss of Jeff, Kathy and I will be traveling on the 23rd so won’t make it to the wake. Please know our thoughts and prayers are of you Brody and the rest of the family. Dennis Lane

I am so sorry for everyone’s loss …. my heart aches knowing how much pain you all are experiencing….. Life is so unfair at times , I pray you all find the strength to get through this … Sending hugs ,love and prayers to all of you 💞

Emily my sincere condolences to you and your family at this difficult time. Sending lots of Prayers and Hugs! Praying for all of you❤️ Vikki Foley

Our hearts break for you, your loss is our loss. Jeff will always be with me as the sweet, sensitive boy he was. As moms we feel your pain, they will always be our littles and nothing ever changes that. “There but for the grace”…we are all in this together 💔

Dear Joyce and Robert,
I am so sorry for your loss. Your son sounds like he was a amazing man. May he Rest In Peace. Please know that you are in my thoughts and prayers. Again, I am so sorry.