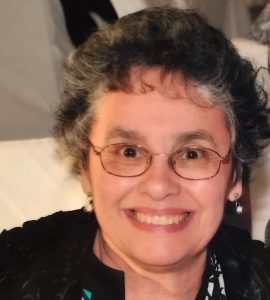 Lynne Anne Daigle, 72, of Dracut, passed away peacefully with her loving family by her side on Tuesday, May 21, at her home after an extensive illness.  She was married to Arthur J. Daigle with whom she celebrated their 51st wedding anniversary on the 18th of May.  Born in Lowell, she was the daughter of the late Willie G. and Anna (Rodrigues) Barrio    She graduated from Lowell High School with the class of 1965 and earned her Associates Degree from Lowell Commercial College.

She retired in December of 2013 from the Lowell National Historical Park after 25 years of dedicated service. Among her many duties in Administration she was the park’s Property Officer.  One of her many joys was acting as the Ethnic Food Coordinator for the Lowell Folk Festival.  For many years, she was an active volunteer for with Troop 80 of Dracut and the Greater Lowell Council of the Boy Scouts of America.  Lynne took great pleasure mentoring many young men as an active Commissioner, Committee Woman and Merit Badge Counselor.  She also worked as a weekend warrior at Camp Wah-Tut-Ca in Northwood, NH for many years and was trained as the Rifle Range Director for a time in 1986.  In recognition of giving back to her community, Lynne was awarded the Silver Beaver Award, a council-level Distinguished Service Award of the BSA.  In her free time Lynne was an avid reader and extensive traveler, visiting National Parks all over the country.

Besides her husband, she is survived by her son William J. Daigle of Hudson, NH and grandchildren Kassandra and Tyler Daigle both of Hudson, NH.  She is also survived by her twin sister, Gail P. Barrio of Dracut, sister-in-law, Donna and her husband Cleve Parkhurst of Naples, FL, two nieces and a nephew.  She is also the aunt the late Gregory W. Saunders who passed away in 1991.  In addition, she leaves behind longtime close family friend Alan Mousseau of Pelham, NH and loving, compassionate cousin and caregiver Carol A. Plante of Lowell.  The family would like to thank Merrimack Valley Hospice for their wonderful care and concern.

Lynne Anne Daigle, of Dracut, MA, died Tuesday, May 21. Calling Hours, Saturday, May 25 from. 9:00 A.M. to 11:00 A.M. at the Dolan Funeral Home, 106 MIDDLESEX ST. CHELMSFORD. A Funeral service will be celebrated at 11:00AM at the Funeral Home following the calling hours. ARRANGEMENTS BY DOLAN FUNERAL HOME 978-251-4041. Guestbook at www.dolanfuneralhome.com

Bill, I am very sad to hear of your great loss. Your Mom sounds like an amazing woman who lived her life well. My deepest condolences.

Bill, Sorry to hear of your Mom’s passing. My deepest condolences to you and your family at this very difficult time.

Art, we are so sorry for your great loss. We enjoyed many occasions of visiting with Lynne and you. We will miss her vitality and wonderful smile. Our deepest sympathy to you and your family.

We worked with Lynn for many, many years at the Lowell Folk Festival, and we are so sorry to hear this sad news. She was always so helpful and kind to us all. The thoughts and prayers of our Lowell Armenian Relief Society Chapter are with her family.