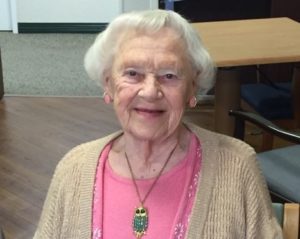 Margaret (Adams) Juhola formerly of Lebanon, Maine and Beverly, Massachusetts passed away peacefully at the Westford House Nursing Home in Westford, Massachusetts on Sunday March 24.  She was the beloved wife of Carl Juhola with whom she shared 62 years of marriage before he died in 2006.

She was born in Steele, North Dakota on June 19, 1926.  She was the daughter of William and Waupeka Adams and raised in Minneapolis, Minnesota and Braddock, North Dakota.  She went to school in Braddock, ND and Seattle WA.  Margaret’s favorite pastimes were travel, playing bridge and square dancing.

She is survived by three children, Roger Juhola and his wife Laurene of Carver, MA, David Juhola of Danvers, MA and Peggy Pride and her husband Brian of Lebanon, ME; four grandchildren, Eric Juhola, Kendra Magyar, Alicia and Nicholas Pride; two great grandchildren, Jacob and Caroline Magyar, her loving niece and nephew, Donald and Susan Juhola of Chelmsford, MA and Margaret’s brothers: Lloyd and Jack Adams both of  Minnesota and sisters:  Nellie Avelsgard, Susan Gullickson and Judy Adams of Minnesota and Shirley Puklich of North Dakota.  She was predeceased by her brothers:  William, Robert and Frank Adams and her sister, Betty Johnson.

A Celebration of Life is being planned in June.  In lieu of flowers, memorial contributions may be made to the Compassus Hospice at 790 Turnpike St., Suite 302 in North Andover, MA.

It is so hard to say how much Margaret meant to us.Margaret enjoyed life and made the most of it.She had traveled across the country always visiting family and friends. She had a way of making people smile. She had such a fan of Hallmark cards always remembering Birthdays and Anniversaries with no face book or computer for her. We enjoyed her love of Coffee, Music and Color–pastels only lavender ,blue and pink. If you can’t dance to the music then tap your fingers.Peace and rest now forever rejoined with Carl and the Lord.

My heartfelt sympathies to Margaret’s family during this difficult time.

Margaret was one of the kindest human beings l have ever met in my life. It was during an extremely difficult time in my life that both she and Carl lent me a helping hand in so many ways.l felt like a member of the family. Her smile and gentle caring for people could hardly go unnoticed. And “HOOOO” could forget her Love of Owls! I gave up trying to count how many Owl figurines were in their Beverly. MA home. Margaret….Thank You for being a part of my life.